You are here: Home / Archives for medical malpractice 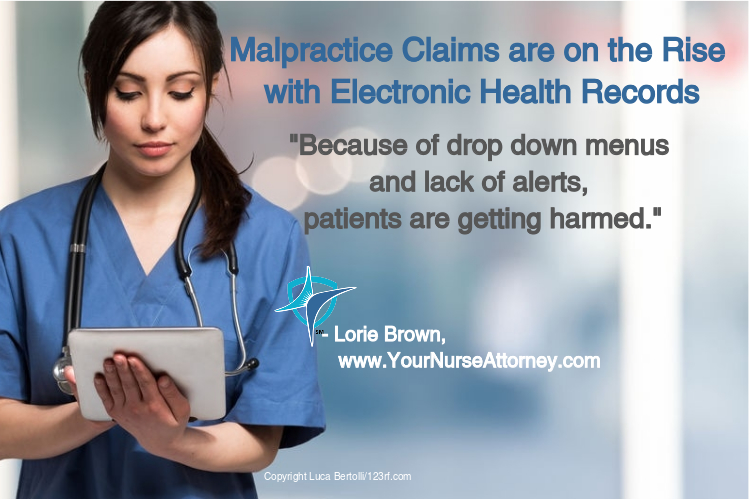 According to The Doctor’s Company, a medical malpractice insurance company, more and more claims are being filed as a result of Electronic Health Records (EHR).  Because of drop down menus and lack of alerts, patients are getting harmed.

In one example, a physician intended to order 15mg of Morphine.  The drop-down menu gave him the choice of 15mg or 200mg.  The physician mistakenly ordered the 200mg.  The patient took the 200mg Morphine with Xanax and became somnolent and spent the night in the hospital.

There are numerous problems with copy and paste.  In one case, a 38-year-old man presented to his PCP with symptoms of shortness of breath and dizziness.  The man died 5 days later of pulmonary embolus, the Plaintiff’s Attorney was able to show that the physician copied and pasted his previous note into the visit just prior to his death.  Not only is this information available in the audit trials to show everything which was done to the EHR, but the same exact vital signs were copied, and numerous spelling errors were noted in the previous note and copied with the same errors.  The allegation was failure to properly assess this man.  Had he been properly assessed; the physician would have been able to identify signs and symptoms of a pulmonary embolus.

What do you do to avoid malpractice with EHR?  I would love to hear your comments below.

In a recent court case Stubblefield v. Morristown-Hamblen Hospital Association, where a patient underwent a cardiac catheterization procedure and was on a nitroglycerine drip, the patient begged the nurse to stop the nitroglycerine drip because of nausea and headache.  The nursing staff refused and continued the drip.  The doctor was never notified.  It was later discovered that the patient had developed a hematoma and pseudoaneurysm in the groin and had to be taken to surgery to repair her femoral artery, no doubt due to vasodilation of the blood vessel from the nitroglycerine.

The patient brought a lawsuit against the facility and the nurse alleging battery and failure to properly assess the patient’s groin.  The Plaintiff had hired a nurse expert witness to say it was below the standard of care to not abide by the patient’s wishes and notify the physician and failing to properly assess the groin area.  However, the nurse expert received a phone call threatening that if she testified, she will lose her job.

There was what’s called a summary judgment proceeding which means if the Plaintiff/patient does not have an expert, the case will be dismissed.

Since the nurse expert had to withdraw at the last minute due to threat of losing her job, they did not have an expert and the judge dismissed the case.  However, the Court of Appeals recognized the witness intimidation of the threat to lose her job and sent the case back to the trial court for further review.

The point of this story is that if you are a witness in a medical malpractice case or choose to serve as an expert, it is important to tell the truth and if you feel you are being coerced or threatened or manipulated in any way, tell someone.

These tactics only serve to pollute our criminal justice system which is one of the best in the world.  You may or may not agree with malpractice cases but that is why we have our legal system in place for a jury of our peers to decide these issues.

I’m curious as to whether you’ve been subject to witness intimidation and what did you do about it.  I’d love to hear your comments below.

I’m sure you’ve read in the media or on my blog about Nurse RaDonda Vaught who has been charged with reckless homicide for an inadvertent medication error.

In a news article released by hospitalwatchdog.org, they described what Vanderbilt University Medical Center (VUMC) did not do that could have prevented this tragic incident.

“The real issue in this case is that there were no effective systems in place to prevent or detect the accidental selection, removal, and administration of a neuromuscular blocker that had been obtained via override.”

As in the past, I am in no way saying that Nurse Vaught’s actions were proper.  My position is that this is a medical malpractice rather than a criminal matter!  However, VUMC did not have her back and fired her rather than fix the system issues that contributed to this error.

Once CMS investigated, VUMC had to put systems in place to prevent these types of problems.  In VUMC’s Plan of Correction, the facility has agreed to:

2.         Implement bar coding verification in the radiology department.  Like most areas, if one takes a medication out of the Pyxis or the med cart and gives it to a patient, the medication’s barcode is scanned.  This ensures that the patient is receiving the correct medication.  In this situation, if Nurse Vaught would have been able to scan the patient’s wrist band, it would have alerted her that this was not an ordered medication for this patient.

3.         Implement the second nurse verification in the radiology department.  Having a second nurse review and verify the accuracy of the order and the medication, this would have prevented the death of Charlene Murphy.

4.         Require a nurse to enter “PARA” in the automatic dispensing cabinet (ADC).  In order to obtain a paralytic drug from the ADC, a nurse must first type in the letters P-A-R-A.  This too would have prevented Ms. Murphy’s death.

5.         Implement policies that did not previously exist for monitoring high risk medications such as versed or vecuronium.  It is surprising that prior to the incident with Ms. Murphy, VUMC did not have policies and procedures to monitor such dangerous medicines.  They now do.

The article goes on to question whether the District Attorney (DA) has a conflict of interest because the DA, Glenn Funk, has multiple, personal and professional relationships with Vanderbilt University.  He is an Adjunct Professor at the Vanderbilt School of Law, served on the Vanderbilt Kennedy Center Leadership Council and he and his wife are members of the Next Step Advisory Council at the Special Education Department at Vanderbilt’s Peabody College.

Criminal prosecution will not provide safer medicine.  It is a system issue that needs to be addressed.

It should go without saying that Vanderbilt and VUMC attempted to cover up this tragedy and the Murphy family did not even know of the situation for almost a year after the incident.  My heart goes out to Ms. Murphy’s family, to RaDonda Vaught and to all of the nurses who everyday put their health, their lives, their well-being on the line in the service of others.