You are here: Home / Archives for Newsletter 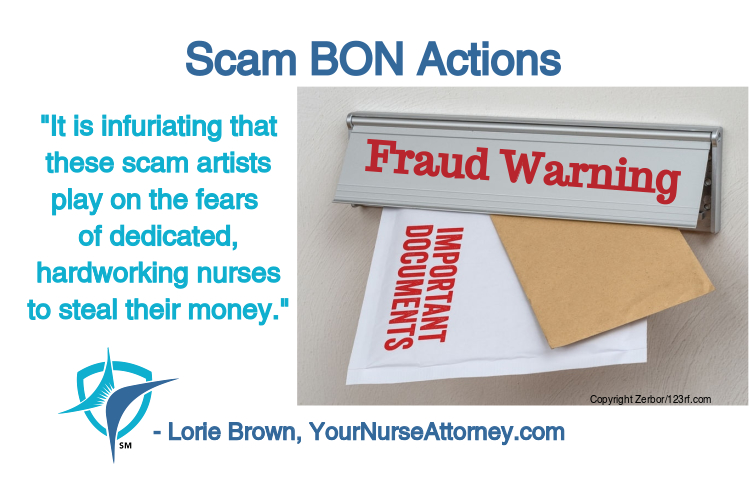 You receive a letter from the Board of Nursing, and you’re scared to death!

Would you believe that, in Idaho, nurses are receiving mailings from the U.S. Department of Justice Drug Enforcement Administration accompanied by a cover letter from that state’s Board of Nursing notifying the recipient that their license is to be suspended.  Click here.

On first blush, it appears to be official and all legal in notifying the nurse that their license is about to be suspended.  It has the nurse’s name, registered address, an investigation number and even her nursing license number.

The letter asks for money to post a bond which MAY be refunded once the case is resolved. 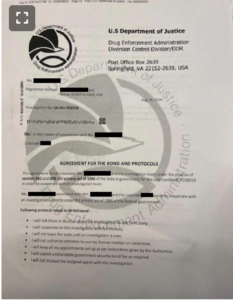 There are red flags throughout this letter.

(1)  The Board of Nursing would never ask for money upfront.  You have an opportunity to contest your matter.

(2)  One of the requirements cited in the letter was that the nurse was not to share or disclose anything about this “investigation” to any third party.  An attorney is a third party.  This letter does not say you have the right to talk to an attorney.  This is paramount language for all Board matters.  Some letters even say if you choose not to hire an attorney, we will consider this a waiver of your right to counsel.

(3)  The letter demands you submit a refundable government security bond for which the Board never requests.

These are huge red flags that these letters and documents are not legal.  In fact, the mailings are an act of fraud.

Unless a Board of Nursing takes action for emergency suspension, which is required to give notice, the nurse’s license cannot be suspended in any way without first having an opportunity to be heard.   The Board also would have to give the nurse an opportunity to seek legal counsel.

It is infuriating that these scam artists play on the fears of dedicated, hardworking nurses to steal their money.  A nurse getting such a communication would be terrified in thinking that their license is about to be suspended.

Any nurse who receives a suspicious letter from the Board of Nursing, any state or federal entity, should have as their first response to seek the advice of an attorney.

These scams are facilitated by the fact that a nurse’s information is a matter of public record and the thief has no challenge in getting the victim’s address and license number to initiate their crime.

Hopefully, you will note and take heed of the “red flags” noted above to protect yourself by immediately seeking the assistance of an attorney should you ever receive such mail.

Pass my warning around to all your nursing colleagues and please report any such scams to the appropriate authorities.  This is our best way stop or at least curb this type of criminal behavior.

Lorie Brown interviews criminal attorney, Marc Lopez of Marc Lopez Law to discuss the difference between Dismissal and Expungement in criminal matters and how each affect matters before the Board of Nursing or the Exclusion List with the Office of the Inspector General (OIG). 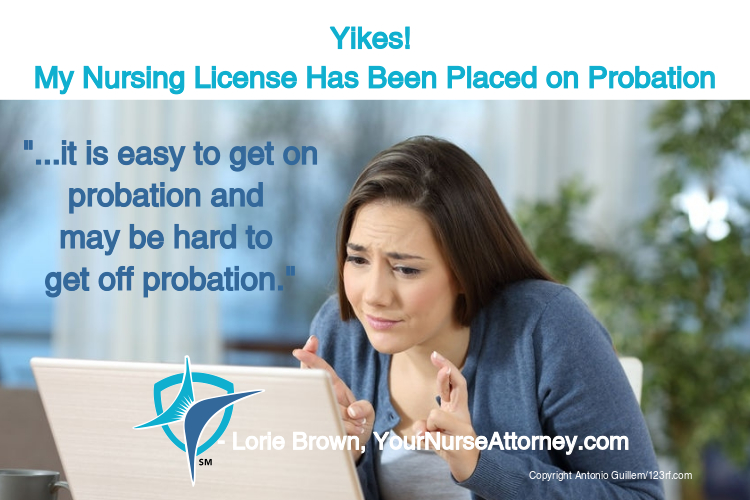 Each year 7,000 nurses have some type of discipline put on their license.

When a Board disciplines a nurse, it can usually do 1 of 4 things.

Furthermore, a potential employer can easily find this information on nursys.com or on the website of the Nursing Board in your state.  In addition, the nurse will be reported to the National Practitioner Data Bank any time an action is taken against their license.

One of my sayings is it’s easy to get on probation and may be hard to get off probation.  At least in Indiana, to get off probation, a nurse must petition the Board and actually attend a hearing where the nurse is put under oath and the proceedings are transcribed by a court reporter.

The nurse then must present an opening statement, call witnesses, introduce evidence, cross examine any opposing witnesses and then present a closing argument.  This is a legal proceeding and the nurse has a right to be represented by an attorney.

The nurse not only must show that she has complied with every requirement of the probation but also present that the conditions that led to her license being placed on probation are no longer present.

My best words of advice are to take your probation seriously and comply with every requirement as if your livelihood depended on it!  In fact, it very well may determine your future career as a nurse.

If you are required to submit documents to the Board, make sure that you send them via certified mail or, in the alternative, by email … and make sure you keep copies of everything.

As I noted, finding a job may be difficult while on probation however, nurses are needed now more than ever.

Rather than just submitting an employment application online, I advise you to find out who the “decision-maker” is and talk directly to that person.

Probation is not the end of the world but you do want to avoid that possibility because prevention of a problem is the best defense. 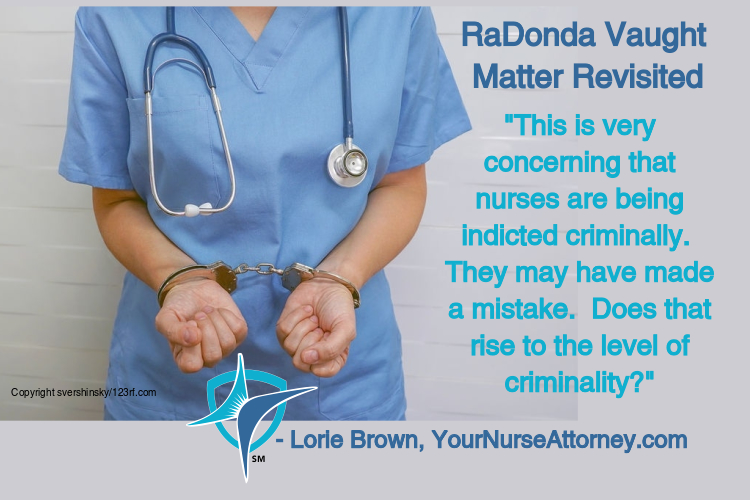 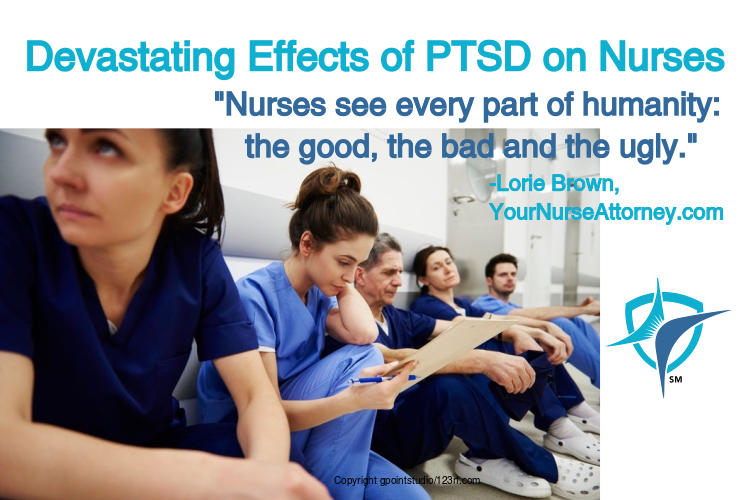 Post Traumatic Stress Disorder (PTSD) occurs in nursing from repeated direct and indirect exposure to traumatic situations.  Nurses see every part of humanity: the good, the bad and the ugly.

In a study done prior to the COVID pandemic, 95% of psychiatric nurses in the nation matched the criteria for exposure to PTSD.  Another study showed that 24% of ICU and general acute care nurses reported PTSD symptoms as well, while only 17% of emergency room nurses had a probable PTSD diagnosis.

Karen J. Foli, an associate professor at Purdue School of Nursing in Indiana, published an article in April noting that of the 1478 questionnaires, 372 nurses commented about job trauma they had experienced.  Responding nurses who work longer shifts and are exposed to unsafe situations that jeopardize patient safety only intensified these findings.

Nurses are required to hurry through tasks, going without food and hydration during their shifts, sometimes without even a restroom break, resulted in unwittingly falsifying patient care documentation.  Nurses experienced a range of emotions among which were stress, anxiety, grief, guilt, anger, burnout, and flashback.

According to the World Health Organization, suicide is the 10th leading cause of death in the global population.  It is so sad that nurses are the forerunners in these studies.  Most nurses recover naturally from the mental and physical toll that befalls them, however, a small minority will not.

As a nurse, it is important that you get the help that you need, to work in a safe, supportive workplace and to get early intervention if necessary.

Here are some courses available from nurse.com which can help you understand more about PTSD and anxiety disorder.

In the meantime, if you are not working in an environment that is safe and supportive, maybe you need a change because your mental health and wellbeing are too important, and so is your license.  You can always get another job but not another license.