You are here: Home / Employment / What Happened To Nurse Do No Harm? 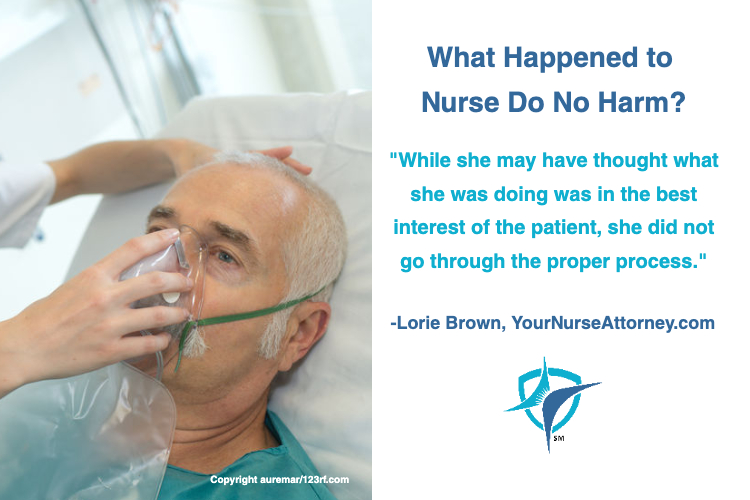 52-year-old Connie Sneed is charged with a Level 5 felony for practicing medicine without a license in Indiana. Ms. Sneed, who had been with the nursing home for 15-years, posted a comment on a Facebook page which caused her to be charged criminally.  Her comment was, “I just want y’all to know the hardest thing I’ve ever done in 28 years start a patient on O2 for 4 days 12 LPM. with a non-rebreather mask … I asked him on day 4 if he’s tired he said yes I said do you want me to take all this off for you and let you go and fly with the angels and he said yes.” She unhooked the oxygen from the resident, and he succumbed a few hours later.

This man did have a diagnosis of COVID and his oxygen saturations were 64%.  Ms. Sneed never contacted the doctor to ask for an order.

Nursing is not an independent practice.  There must be physician orders or a policy and procedure that protects us for everything that we do.

Ms. Sneed did talk to the daughter who told her, “She could remove it but try to put it back on him later when he calmed down.” Apparently, the daughter did not understand that removing the oxygen mask would cause his demise.  The daughter cannot give physician orders.

In an interview with state health inspectors, Ms. Sneed said that it was a terrible week. She had been caring for more than 40 COVID-19 patients at the facility when she forgot to notify the resident’s physician of his decline in condition.

While she may have thought what she was doing was in the best interest of the patient, she did not go through the proper process.  She had a duty to pick up the phone to tell the physician about his declining condition and let the physician determine what the best plan of action would be.

Fortunately, Ms. Sneed was not charged with manslaughter as she could have faced a possible death penalty.

So, sometimes caring for patients may not be in alignment with what you believe but we are here to serve the patients and not ourselves

I did have the opportunity to look on the Indiana Professional Licensing Agency website and Ms. Sneed is listed as having an active license as well as a pending compact license application.  It appears that she wanted to practice in other states as she lived near the Kentucky border.

While it is unfortunate that Ms. Sneed was so busy with 40 COVID patients, no nurse has the right to take a patient’s life in their hands.  [Indianapolis Star article]

Let me hear what you think of this in the space below.

Until next time, happy nursing.