You are here: Home / Employment / Speech Is Not Always Free 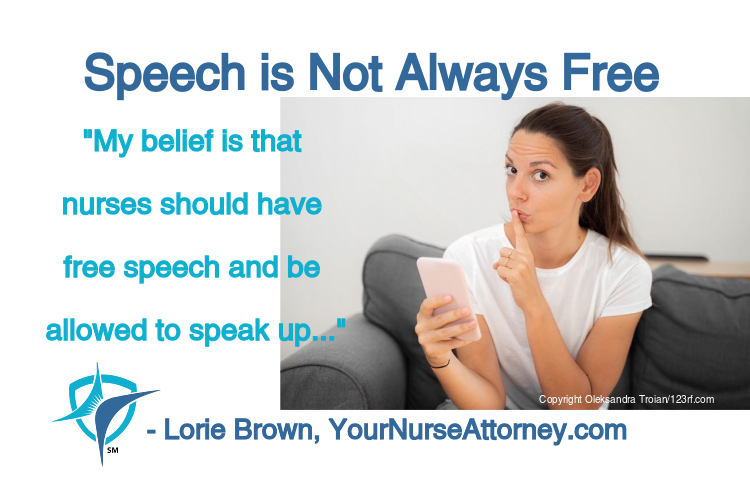 Typically, I don’t comment on cases that occur outside of the United States but I feel strongly to bring up a case now that is not only interesting but has implications for all nurses.

In 2015, a nurse from Saskatchewan, Canada posted a Facebook criticism regarding her grandfather’s care.  Carolyn Strom made her posting as a private citizen, however, the Saskatchewan Registered Nurses Association (“SRNA”) found her comment to be professional misconduct.  She was fined $26,000 Canadian Dollars (about $19,600 U.S.) which she tried to appeal in 2018.

However, that appeal was unsuccessful leading her to then appeal to the Saskatchewan Court of Appeal which overturned the SRNA and lower court decisions.  The issue involved was freedom of speech and the statement which she had made in her personal capacity.  The Court of Appeal ruled that “criticism of the health care system is in the public interest and when it comes to frontline workers it can bring positive change.”  For the full story, click here.

For a number of reasons, this case has captured my interest. I am not aware whether she was charged with the Board’s attorney fees or exactly why her fine was so high.

Fortunately, she had the support of other organizations arguing on her behalf including the Saskatchewan Union of Nurses, the BC Civil Liberties Association and the Canadian Constitution Foundation.

As the matter progressed, Carolyn started a GoFundMe page which provided her with about $27,000 Canadian Dollars ($20,400 U.S.) to help with legal costs.  I am sure those costs were expensive.

The SRNA, which is similar to boards in the United States, claimed that Ms. Strom should not have taken her initial grievance to Facebook but to their organization.

As I say, “You are a nurse 24/7.”  Always be careful of what you post on social media!  My belief is that nurses should have free speech and be allowed to speak up, regardless whether they be acting in their personal or professional capacity.  That being said, at least the SRNA initially felt differently.  It is unfair that any nurse would be forced to take on these legal fees to pursue a matter before the courts in order to receive justice.

I applaud Carolyn for her efforts in sticking to her beliefs and not being silenced for her personal beliefs about care rendered to her grandfather.  I can’t imagine what she endured for this 5-year legal battle.

What would you do in this situation?  Would you accept the excessive fine or continue your fight with an appeal?  Let me hear below what you think.