You are here: Home / Employment / Are Nursing Board Actions Permanent Public Record 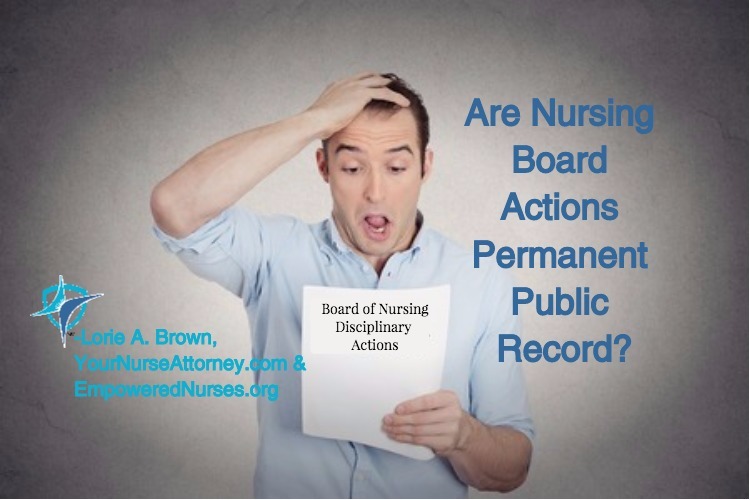 I am often asked (1) if a Nursing Board matter is a permanent public record and if so, (2) is there any way to get that record expunged?

Unfortunately, there are only a few states that allow expungement of Nursing Board records and only under very limited circumstances.  Kentucky is one of those states but, again, only if certain circumstances are present.

Once you have a formal complaint or discipline taken against your nursing license, it does become public record.  The theory is that the public has the right to know if a health care provider has had any action(s) against their license.  It is even publicly available on www.nursys.com.

Or, what if a nurse was reprimanded early in her career then goes on to have an exemplary career for 15 years? The nurse has a perfect, record but for that one blemish early on that is no longer meaningful. Is it “promoting the integrity of the profession” by stigmatizing that nurse’s record for an error that occurred 15 years before, which no longer represents his or her current practice?

Section 1. Definition. “Expungement” means that all affected records shall be sealed and that the proceedings to which they refer shall be deemed never to have occurred.

Section 2. A nurse whose record has been expunged may properly reply that disciplinary records do not exist upon inquiry.

(1) Consent decrees that are at least five (5) years old if all the terms of the consent decree have been met.

(2) Agreed orders and decisions that are at least ten (10) years old and which concern one (1) or more of the following categories, if there has not been subsequent disciplinary action and all of the terms of the agreed order or decision have been met:

(b) Paid fees that were returned unpaid by the bank; or

(c) Practiced as a nurse or advanced practice registered nurse without a current license, provisional license, or temporary work permit.

(3) Agreed orders and decisions that are at least ten (10) years old and which resulted in a reprimand, if there has not been subsequent disciplinary action and    all of the terms of the agreed order or decision have been met.

(4) Agreed orders and decisions that are at least twenty (20) years old, if there has not been subsequent disciplinary action and all of the terms of the agreed order or decision have been met.

For those who have had a Nursing Board action and want that matter removed from public records, I would strongly suggest that you contact your legislature to get this changed.  It is unfair that a 1-time isolated event is forever on a nurse’s record or if you’ve had a criminal matter expunged and it remains public on the Nursing Board record.

Do you believe that Nursing Board records should be removed after a certain time?  What circumstances would you propose?  I would love to hear your thoughts in the comments below.