You are here: Home / Employment / License Renewal: Honesty Is The Best Policy 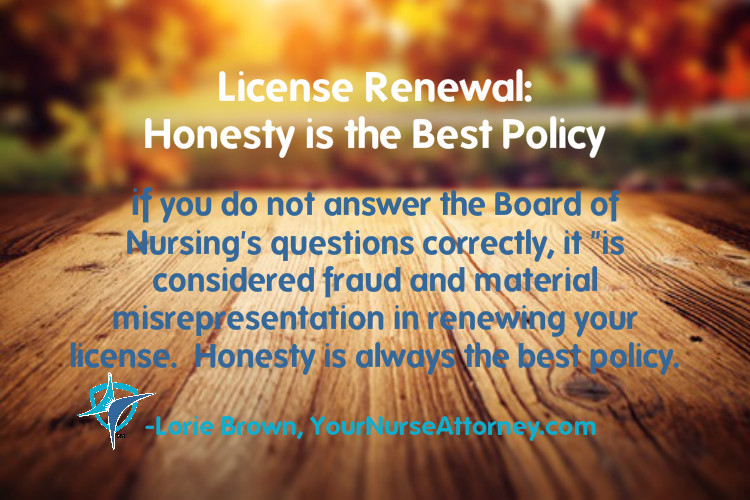 It’s that time of year in Indiana, license renewal of the State’s nurses. If you’re not in Indiana, I am sure that you have a similar renewal process so check these out; I think these tips will be very helpful!

The Board asks 6 questions in the renewal process because they want to know that you are safe to practice. If you answer “yes” to any of these questions, the Board will require you to give an explanation for your “positive response.” The Board may then call you in for a Personal Appearance.

You need to answer these questions for the period since you last renewed. Meanwhile, it is worthy to note that if you do not correctly answer these questions and if there is a subsequent investigation where it is learned that that you did not properly respond, that is considered fraud and material misrepresentation in renewing your license. Honesty is always the best policy.

When in doubt, it is better safe than sorry; always disclose what happened. You may feel best to have an attorney assist you with the responses to help describe what happened and present it in the light most favorable to you. An attorney will help you to provide accurate information to the Board.

Question number 1 asks “Since you last renewed, has any professional license, certificate, registration, or permit you hold or have held, been disciplined or are formal charges pending in any state?” If you have an investigation pending that is not discipline, you are not required to answer “yes” to this question unless you have had formal charges or discipline against your license. However, it would seem logical that the Board will know that you have had formal charges and whether or not the matter had been resolved. However, you still must answer “yes” to this question on the license renewal.

In Question number 2 it reads “Since you last renewed, have you been denied a license, certificate, registration, or permit in any state?” This question is self-explanatory. A denial of any of these items requires you to answer “yes” and provide the explanation.

Question number 3 asks “Since you last renewed, and except for minor violations of traffic laws resulting in fines and arrests or convictions that have been expunged by a court, have you been arrested, entered into a diversion agreement, been convicted of, pled guilty to, or pled nolo contendere to any offense, misdemeanor, or felony in any state?” This can be a point of confusion. In Indiana we have a relatively new expungement law that says one need not report any matter which has been expunged by the Court. The Board cannot take an expunged matter into consideration.

However, since the expungement law has been in effect for a relatively short time and you cannot get a matter expunged until a period of time has gone by depending on what you want expunged (arrest only or type of charge), the question may still have to answered.

Again, honesty is the best policy! If the Board learns that you did not disclose an arrest or charges, even if they were dismissed, that still would be considered as fraud and material misrepresentation in renewing your license.

Question number 5: “Since you last renewed, have you ever been terminated, reprimanded, disciplined, or demoted in the scope of your practice as a Nurse or as another health care professional?” Any discipline you have received requires you again answer “yes” to this question.

Even if you were disciplined for attendance, you still must answer the question affirmatively. Though attendance may not seem to be within the scope of your practice as a health care provider, the Board may consider it as “patient abandonment.” Therefore, you must disclose any discipline, even for attendance. I can’t say it enough; honesty is the best policy.

Some nurses forget that they were disciplined or claim that “I was not told about this,” I am surprised. If it is in your employment file, you are responsible for reporting it to the Board.

In Question number 6, you are asked “Since you last renewed, have you been excluded from being a Medicare or Medicaid provider?” In this question, the Board wants to know if you are on the exclusion list of the Office of Inspector General (“OIG”). If you are on this list, you must disclose to the Board that you are not allowed to take care of Medicare or Medicaid patients.

Should you be on the exclusion list, you would have received a letter telling you so. You can check the OIG exclusion list online at http://exclusions.oig.hhs.gov/ to see if you are on it.

Some of these questions seem straightforward but should there be any question about the interpretation of one of these questions, get help. “I don’t know” or “I misunderstood the question” is not a defense. If you fail to disclose a positive response on your nursing license renewal application, you engaged in or knowingly cooperated in fraud or material deception in order to obtain a license to practice in accordance with Indiana Code § 25-1.9-4(a)(1)(A). Remember honesty is the best policy!